Never; will life as we know it change,

East and the west may be divided,

But freely are we able to move between.

The conflict lies amongst the governments,

Again we tell ourselves that,

It will never concern us or our families.

Whispers of change are getting louder,

Another neighbor has left yet again,

The day begins as usual,

We get ready to cross to the other side,

There is a crowd where the divide is,

Guards are posted by barbed wire,

What are they protecting?

There is a silent divide between guard and civilian,

Suddenly someone runs towards them,

We hear a shot, again and again,

The cold reality hits us,

Never did we ever believe,

this day would come.

With that barbed wire,

Never will we cross freely again,

Never will we live in peace,

Never will we forget missed opportunities,

Never will we be complacent,

Never will we keep quiet again,

Never will we doubt again,

Was looking through some postcards i got from my recent trip to Germany and the ones that hit me the most were the ones picturing the Berlin wall in the 1960s. I’ve not read enough to make comments about it, but, just looking at how people looked over the wall or found ways to made me wonder how it felt like to be trapped in there against your own will. Granted, not everyone in East Berlin wanted to go over to the West, but from the many escape attempts we’ve learned about we know that there were definitely those who weren’t in the East on their own will. Why build a wall if there’s nothing to keep in right? 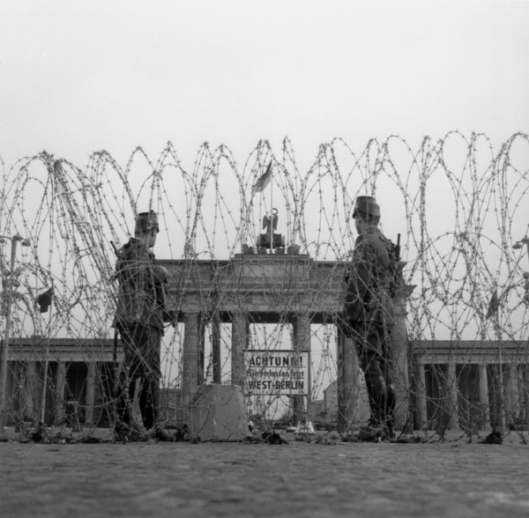 As such, i’ve made an attempt at poetry writing based on this image that I had. This was the ‘Berlin Wall’ at the very beginning. It was only barbed wire as they could not build a wall overnight, but in terms of restriction, it mirrored those of a wall. I remember the guide telling us stories of people just staring at the barbed wire and people who attempted to cross were shot dead on the spot. Those stories were the basis of this character who believes that what the government is doing has nothing to do with them/him, they keep quiet, ignoring the signs around them until one day they wake up and it’s too late. Even then it takes a rude awakening for them to realize that life will never be the same again. I think that’s how i feel with all the politics, local and international happening around me. It’s easy to just live your life and pretend it won’t affect you, but truth it, it will, eventually. I’m not saying i’ll become a political activist, i wouldn’t know where to start honestly. I think we need to be aware of the issues that arise, start conversations about it, and when it comes the time to act, act wisely.

p.s.Had to use italics to separate the stanza’s as wordpress automatically adjusted it to space everything out evenly.

Made a day trip to Kuala Terengganu this Raya and one of the recommended places to see was the local chinatown. So we made our way there and stumbled across this place. Mek Awang serves traditional and fusion peranakan food. The menu is fun and interesting and the staff that served us was well informed about the dishes and recommended some good stuff.

Good for: brunch, lunch and tea.

One thing that i liked about the menu was that they had the ‘core dish’ like Nasi Hailam (Hailam rice) for example, and then you could pair it with ayam kari (curry chicken) so you’re not just stuck with one choice. When it says premium on the side, it just means that the portion is bigger which is a good choice if you’re really hungry. I would say that even the normal serving is filling for the average person as you can see from the picture below. This was what i ate and they were generous with the chicken and rice. 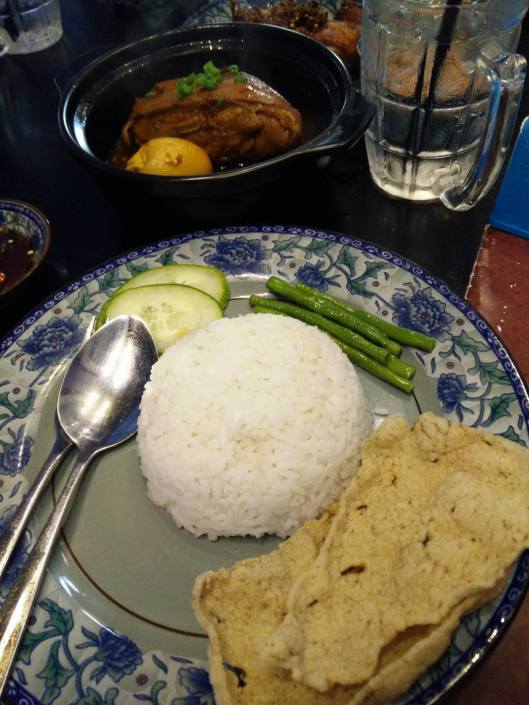 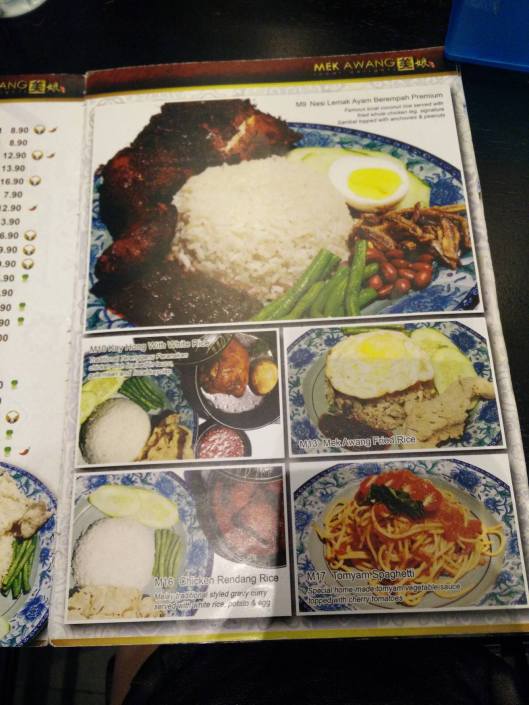 A visual of some of their recommended menu items 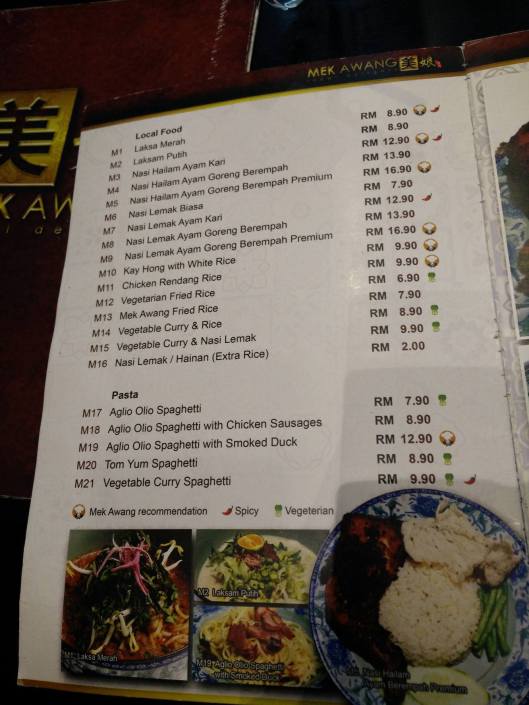 I would say that the prices are reasonable and it’s cheaper than what you would get in Kuala Lumpur. It would definitely be a $$ on Yelp just to give you an idea of the price range if you’re on a budget.

The server who took our order was really chatty and friendly and made good recommendations, the other staff could be better and more attentive as it was a little difficult to get their attention.

This is the first place i’ve seen that serves uniquely Malaysian waffles. We’ve heard of chicken and waffles in America, well here there’s curry chicken and waffles, cendol waffles, egg and sambal waffle. I’m really impressed by this and you can see the fusion of east and west in their menu. You can see the same thing for the spaghetti dishes that was in the picture above. 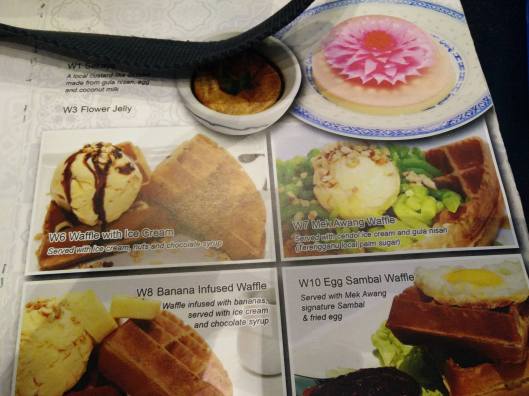 If i didn’t take a picture of the menu, many of my friends would not believe it and that’s what i love about this place, the creativity with local delights. So if you’re craving peranakan food but you’re bored of the usual stuff then pop by this place. Or if you’re feeling too drained by the sun and want some refreshing, cool and tasty desserts then also come by!

I give this place 4 stars!